once in a while i get the itch to do something outside of my usual role. for fun. for experience. to stretch myself a little bit. it's normally a smallish task. a couple years ago, i changed the tire on my truck (something i did again just this past weekend). i installed the light fixture in abi's bathroom a few months ago, and installed one in the basement this weekend.

i find a great benefit in doing things like this. first, it increases my feelings of self sufficiency. second, it gives me experience in a real life thing that some people do all the time, and other people never ever do for themselves, and once i accomplish the task, it becomes significantly easier to accomplish again.

today i did something i never thought i'd do.
today i installed a toilet.

i had a couple of hiccups in the process... a slipped T bolt when tightening it to the bowl stand; a missing gasket that instigated a quick trip to home depot to attach the tank unit to the bowl; a massive blockage that we realized was just braeden. 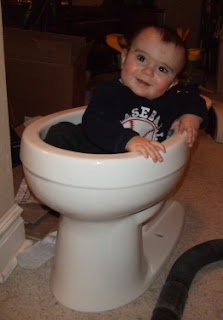 all in all, however, it seemed to go without issue. i do believe it was not only my first toilet installation, but perhaps it was my first time plumbing, ever!

i learned a few informational morsels that i would like to share.
it was a wonderful project that took me only a couple of hours to complete, and ended with a great sense of satisfaction. and so far- no leaks (knock on wood, quick)!

i must admit though, it's the first time i have worked diligently on a project, focused on it, became attached to it, found pride in it, enjoyed it, then peed on it.
Posted by melissa at 10:43 PM