As many parents do, I have become somewhat obsessed with the ability of my children to lose- games, or competitions, in this situation (of course, there are other losses to come which I fear, but one step at a time, people).

It is kind of a natural progression. At first, we let our children win to build their confidence. We lead them to believe that yes, mommy is too stupid to win at Memory or Connect Four, too slow to run up the stairs first, and aren't they clever to be able to conquer a grown-up. They are amazing, and unstoppable, and they know it. Then the inevitable happens. They challenge a friend, sibling, or someone less interested in fostering their tender confidence, and they get trounced. The result? A sob-fest. At which point, any conscientious parent realizes they are about to instruct the lessons of Loss Management.

Once that begins, it's day to day. Some days, they will hear they didn't get the lead in the school play, and they will be disappointed, but know it is okay. Other days, they will be too tired to fall behind in a video game, and they will crumble. Then there are days like Braeden had today, where all you can do is sit back and watch the turmoil unfold in front of you like beautiful, sparkly train wreck.

We played a small, card version of Whac-A-Mole, at his suggestion. It's a simple game, save for my parental manipulation of wins vs. losses. He won the first game. Quickly into the second game, I pulled ahead. His face grimaced, and fell into his hands. A moment later, his trembling voice said, "I'm okay!" He won the next card pile, pleasantly, and when I gained the following pile, he started weeping heavily, turning his face against the seat of his chair, but again he called up, smiling, "I'm still okay!" I won the game, and he really broke down. A moment later.... through his bawls, he was assuring me that he was fine. Rationalizing his way through emotional decay. Now where on earth did he get a trait like that?

I'm thinking we'll do crafts the rest of the day. 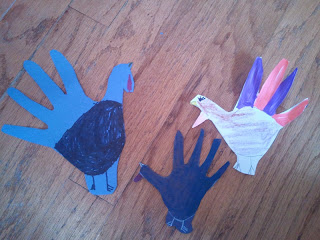