Browsing the children's books in Costco this weekend, I stumbled on a really cute little 2-pack of books that seemed to teach some basic preschool skills to kids ages 2 and up. I am not sure what appealed to me about the books. The cute cover characters perhaps. Or maybe it was the smug little face drawn in the 'o' on the brand logo. Whatever it was, we ultimately decided to purchase a pack for the boy child as a Valentine's gift. Yes, evil mom gives workbooks as presents... he will learn that fun IS work. He will enjoy being pressed into early studies, dammit! Toys are for the weak! 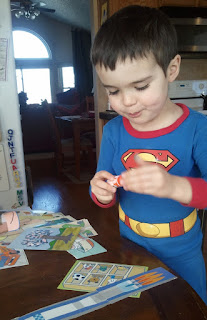 Well, the truth of it is, my slave driving plots backfired. I couldn't tear the boy away from his workbooks this morning! For two and a half hours, he stuck stickers and cut lines and pasted together a host of items from boats and rockets to frogs and birthday cakes. He didn't want to stop. With each item we completed, he insisted we carry on. He was a little irritated with me when I made him play his video games so I could have a 5 minute break to get a drink of water and use the bathroom.

... and how his skills did develop! His cutting precision improved. He used a glue stick for the first time. He counted the snips his scissors made, and felt pride in properly placing eyes, a nose, and mouth on the face of a panda. We had such a great time! 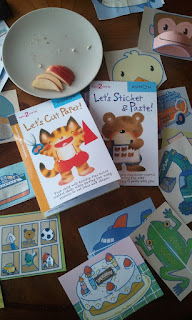 While I don't often generate a strong opinion on consumer products, I have to say I found these small workbooks to be easy to use, visually riveting for my little guy, and well worth the money. For $7.99 we couldn't have even enjoyed a movie together for two and a half hours.

We purchased the Kumon books for Stickers & Paste, and Cutting Paper, and I don't know how long I can wait before returning to Costco to see what other books the Kumon company has for us. The Sticker & Paste book was thoroughly defeated in its singular day of use. It has nothing more to offer us. The book on paper cutting might take us through tomorrow, but it is a long shot. I have a feeling there will be disappointment at reaching the final pages.

It was exciting. This little guy is so enthusiastic about so many things, he himself is a gift. I suppose I expected him to get a kick out of learning and practicing some of these early skills, but I didn't expect it to hold his attention for quite so long. Not when competing with Lego Batman on the PS3, after all.

Good heavens. Less than a year and a half until Kindergarten. We are striking up that flaming hunger for learning! May it burn and burn in him for the rest of both of our days.
Posted by melissa at 12:11 AM