Regardless of bedtime for my children, wake time is consistently between 6 and 7am every single day. Though that's a fine waking time for any grown adult, when we try to live like teenagers, as Todd and I do, we find it helps to have an occasional catch up day. Every weekend, Todd and I will do each other the courtesy of taking turns with the kids so the other may have a sleep in day.

Saturday, it was Todd's turn to sleep in. Abigail kept asking when she could wake Daddy.

I then continued doing something busy that felt productive, but showed no true results. A few moments later, she got up from the kitchen table, where apparently she had been coloring with her markers, and handed me a picture. 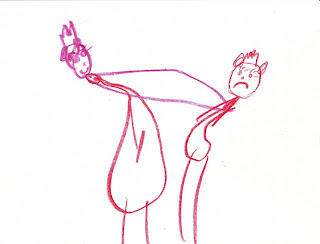 I was very groggy and a bit grumpy myself, but even so, I saw this as quite something. Clearly she wanted to push me because she was upset. Yet she didn't push me... and that was good, right? I mean, parenthood is largely about tiny wins, yes? At the same time, it was an affront to me, her mother, albeit, a graphical affront. So, should there be a punishment for drawing out what you want to do instead of actually doing it? Well, I wasn't sure. Yet, I was grumpy enough to not let it pass without some retribution. 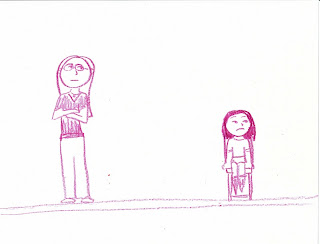 I picked up her marker, grabbed a piece of paper, and drew a picture of me putting her in a timeout for pushing me.

Just look how sad she was!
That'll teach her.
Posted by melissa at 1:00 PM