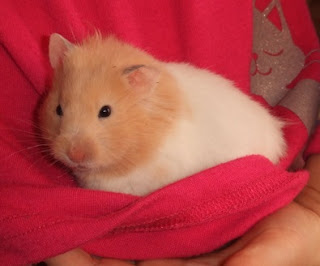 I don't believe I shared news on a relatively recent addition to our family earlier in the winter. After some thought and consideration, it was determined we would acquire a teddy bear hamster from a local pet shop. Thus, Natasha was welcomed into our home.

Well, mostly welcomed. I mean... I was rooting for the bearded dragon. The girly girl wanted something cute and fuzzy, so she enlisted her father as a lobbyist. After mild negotiation, she was able to make the pet selection of her choice, and the lobbyist received primary responsibility for supervision of cage cleaning duties. Hey, all is fair in love and pet acquisitions.

Natasha, however, does not seem willing to accept her appointed role of dim witted house rodent.

One night, before her noisiness had her relocated to our downstairs level, she escaped through a poorly aligned Habitrail ball. After the better part of an hour, we tracked her to a cluttered corner of my bedroom. More recently, she found a poorly latched hatch in her little plastic penthouse. I watched her push it up again and again until she nearly popped out of it. I then solidly clicked the hatch, thinking myself the intellectual superior- for the moment. A few days later, in our family room, I happened to catch a light thumping sound, and I looked up to see her flopped on the floor by her cage, looking rather startled. I grabbed her before her getaway gathered much momentum, and back into the cage she went. I double checked that the hatch was secure, but later that same night, we heard rattling sounds behind our component system. Her cage was empty, and sure enough, she sat perched on a bunch of cables. Her blue plastic penthouse view was thereafter obscured by a layer of packing tape.

Well, we were starting to think this plastic cage idea was very cutesy, but very ineffective. Did the tape solve our issue? Predictions?

Yesterday morning, Todd was readying for work as the kids and I lazed around in bed. As he exited the bathroom in the hall, he exclaimed in a reprimanding tone, "ABIGAIL ROSE!" Well, I was shocked as to what in the world my daughter had done already when she had barely been out of bed yet. I immediately became defensive of her, yet listened to his next words...

"NATASHA JUST RAN INTO YOUR BROTHER'S ROOM!" It seemed he was about to accuse her of being careless with her pet.

"Wait a minute," I said. I had distinctly checked the cage, and Natasha was in it when I went to bed the night before, and I really hadn't thought Abi had left the upstairs since waking. "Abigail, have you even been downstairs this morning, to take Natasha out of her cage?"

The hamster was wrangled from Braeden's room as we considered this mystery. Abigail ran downstairs, and the metal barred door to the cage laid plainly open. We put Natasha back in the cage. We agreed at some point within 24 hours, a glass aquarium would be her new home. Todd affixed a butterfly clip to the cage door as a temporary solution and went to work.

By this time, it was clear we had an escape artist on our hands. Little did we know her more disgusting crimes were yet unidentified!

Todd and the children went out for the glass aquarium when he returned from work (notice, I still avert primary responsibility for housing the little beast). They decorated her glass enclosed space with its new amenities until dinner was on the table. After we ate, Abi was excited to relocate Natasha. She was excused to go look at Natasha while we finished eating.

"Mommy!" she said. "There is a CHAIN in Natasha's cage." I asked her what color it was, and she said it was gold. Huh?

Now I was confused. I don't often have moments when I think, kids are so weird, and just ignore my daughter, but I admit this was one of those distracted moments. MISTAKE! I didn't really take her seriously until she came at me holding a sticky, balled up cluster of tarnished silver, intermingled with a few moist pine chips and other... clumpy unidentifiable deposits.

Eeww! I recognized the chain as one of my silver necklaces as I rinsed it loose from congealed hamster saliva and... other things. Not only had that little critter escaped, scrambled all over the house and somehow climbed the stairs up to our bedroom level, but she had swindled my silver necklace (I know not from where), tucked her treasure into her sneaky little pouches, and kept it there safe until she could deposit the booty to her inept prison! One can only speculate as to what her next steps would have been. Was she going to use my lovely necklace to bum a few extra smokes from her cell block mates, the goldfish?!

We will never know.

My necklace has been soaked in hot soap. The mini-swindler now resides in her transparent home. Time will tell if her plots of mischief are now thwarted. I admit, I give her a good bit of credit for being a clever little beast. Now as long as she stays within bounds I won't have to bring in a boa constrictor as her new warden.
Posted by melissa at 9:18 AM